Fishing season came to a close, haven't fished last week for years. Two days with best mate Biggun on the Trent and the Pats, then last day had a great and enjoyable trip with Biggun and some mates on the Kennet.

Brilliant win for Jensen in Australia, but for a safety car it could have been a McLaren 1-2, but then it's the same for everyone.

Daughter-in-Law finally (14 days late) gave birth early this morning. We are Grandparents for the first time - so my latest nickname of "Pops" is now more apt perhaps.

It pains me to say well done to the Taffs. But I was pleased with England's performances with such a young side. I hope they give the nod to Stuart Lancaster to carry on - England should be coached by an Englishman.
Posted by paul4 at 8:54 AM No comments:

Yet another log period without adding to my blog - is it really worth having it I ask myself.

So what's happened since last entry? In no particular order.

Now added Treasurer role to my Membership duties in the ABF, Bob has a lot on and needed someone to take over.

Converted BarbelAngler to a new forum software, with help of course. It went well, and have Conrad on board to help now, as with Phoenix.

Enjoyed Arsenal beating thumping the old enemy last week, sweet, albeit after a couple of poor results (FA Cup and Champions League, but league form has been good, a far cry from earlier in the season when the wishful-thinkers were talking relegation. Was good to see the great man, Thierry, back for a spell. Will he return again? a bit old for regular games but surely a talisman and inspirational figure, hopefully with a coaching role. Denis Bergkamp was going to return too, where is he I wonder?

Enjoyed the (track) cycling world cup at the Olympic velodrome, London. Looks to be a fast track with atmospheric conditions and temperature well designed, but then all competitors will be faster.

Finished re-furbin' our bedroom. Walls and ceiling re-plastered, and opted for having wardrobe doors custom made. Old and new styles below 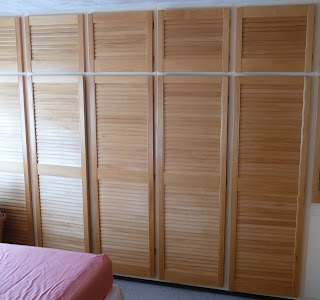 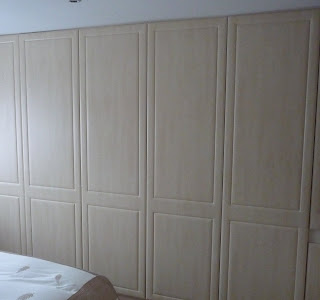 We like it so am starting the next bedroom soon.

Done some fishing recently, but the barbel are not playing very often. I know my chosen venue is hard but it lures us back time and time again. Still, a nicer place to blank would be hard to find. Why go fishing? in order to enjoy it, fish or not. Do I enjoy it? yes, definitely.

Am looking forward to the F1 season, but pi##ed off about the reduced coverage on (terrestrial) TV, yet another sport going the way of Sky, but for how long? Shame Martin Brundle and Ted Kravits going too, but at least "we" don't get that idiot Legard returning to BBC.

Daughter-in-Law still got her knees together, so no news of baby yet (due yesterday)
Posted by paul4 at 5:06 PM 1 comment:

My new blog - it may well be redundant before it really gets started. It's a new toy but I might get bored, although I'm gonna write short posts and NOT essays.

Oh, and by the way, I "don't do" this blog following stuff

This is "my" avatar

originally made solely for me, so hands off !

Some stuff about me

paul4
nr. London, United Kingdom
I am a barbel angler, and a centrepin enthusiast - a user not a collector.

In 2005 I took early retirement after almost 40 years in a design office, then part-time self-employed as decorator and handyman, and loved it, but now wound down and doing some at home.